We will proceed to elaborate the “Methods” and “Procedure”s of environmental standard of MIL-STD-810 in our article series. Instead of writing down the obvious information already given in the standard, we will be discussing more practical information on product design, features regarding “Equipment Under Test” (EUT) and conducting tests.

The acceleration test is performed to assure that materiel can structurally withstand the steady state inertia loads that are induced by platform acceleration, deceleration, and maneuver in the service environment, and function without degradation during and following exposure to these forces. Acceleration tests are also used to assure that materiel does not become hazardous after exposure to crash inertia loads. This test method is applicable to materiel that is installed in aircraft, helicopters, manned aerospace vehicles, air-carried stores, and ground/sea-launched missiles.

Procedures of this method are as follows:
Procedure I - Structural Test. Procedure I is used to demonstrate that materiel will structurally withstand the loads induced by in-service accelerations. 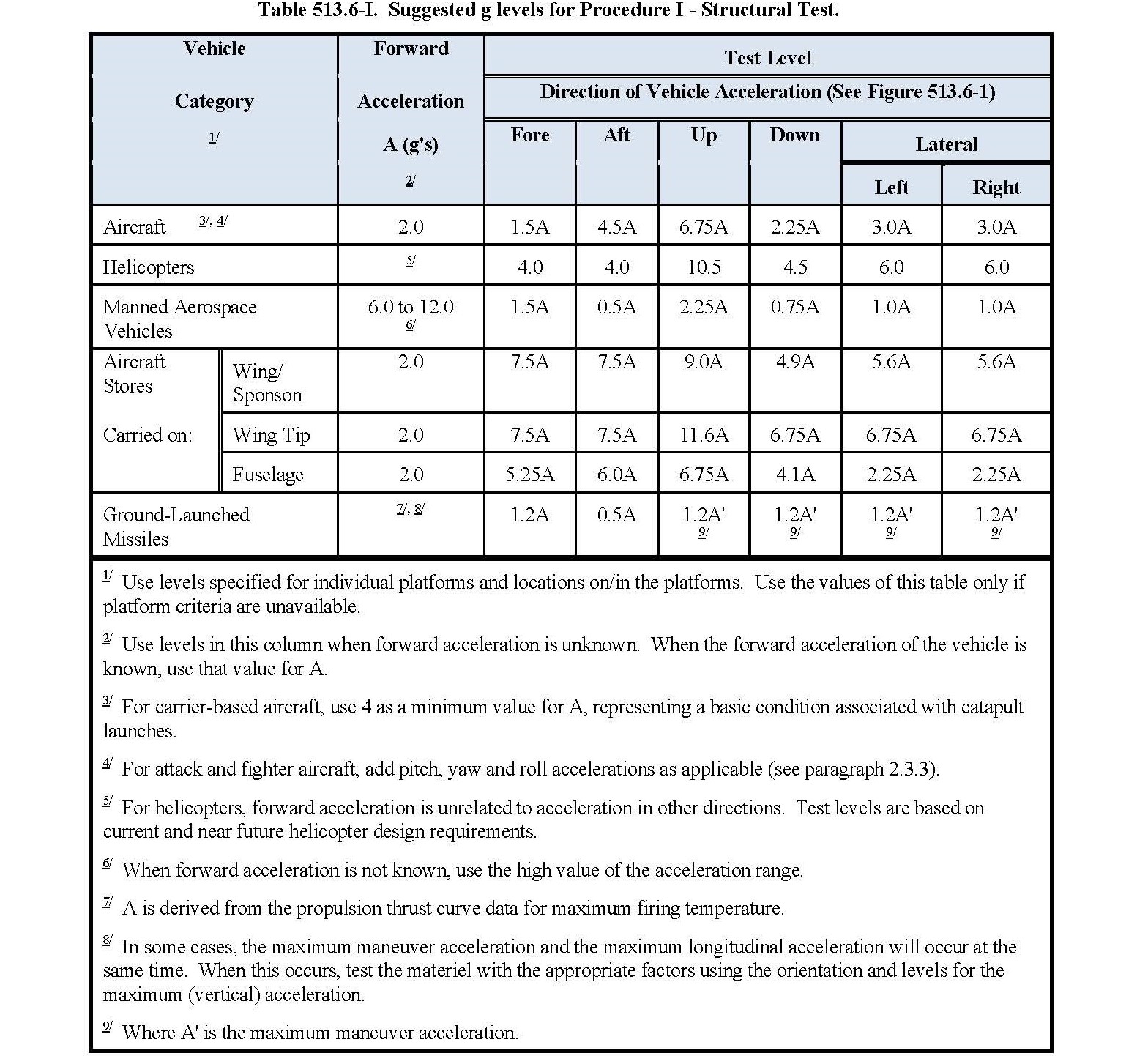 Procedure II - Operational Test. Procedure II is used to demonstrate that materiel will operate without degradation during and after being subjected to loads induced by in-service acceleration. 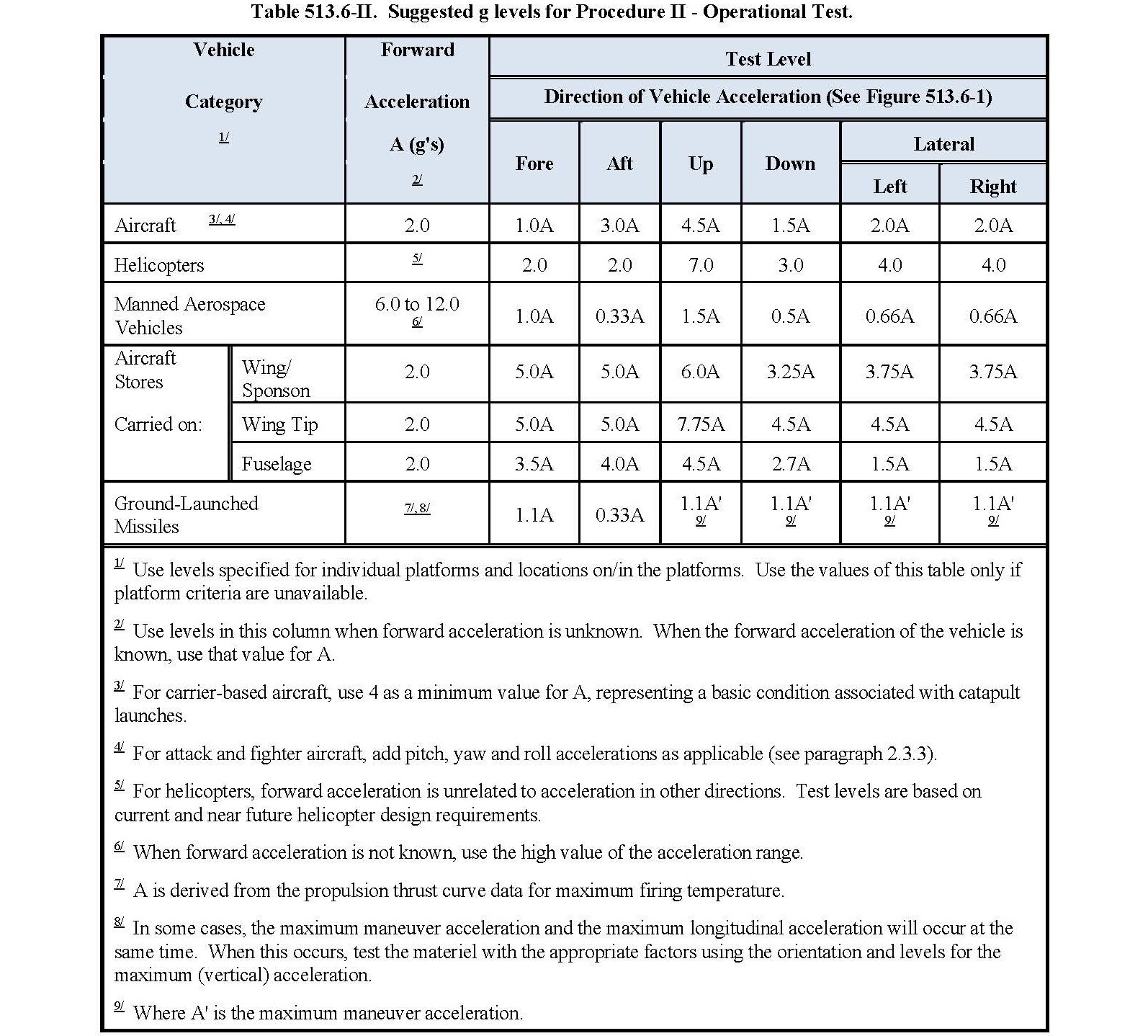 Procedure III – Crash Hazard Acceleration Test. Procedure III is used to disclose structural failures of materiel that may present a hazard to personnel during or after a crash. This test is intended to verify that materiel mounting and/or restraining devices will not fail and that sub-elements are not ejected during a crash. Use for materiel mounted in flight occupied areas and/or that could block aircrew/passenger egress or rescue personnel ingress after a crash. 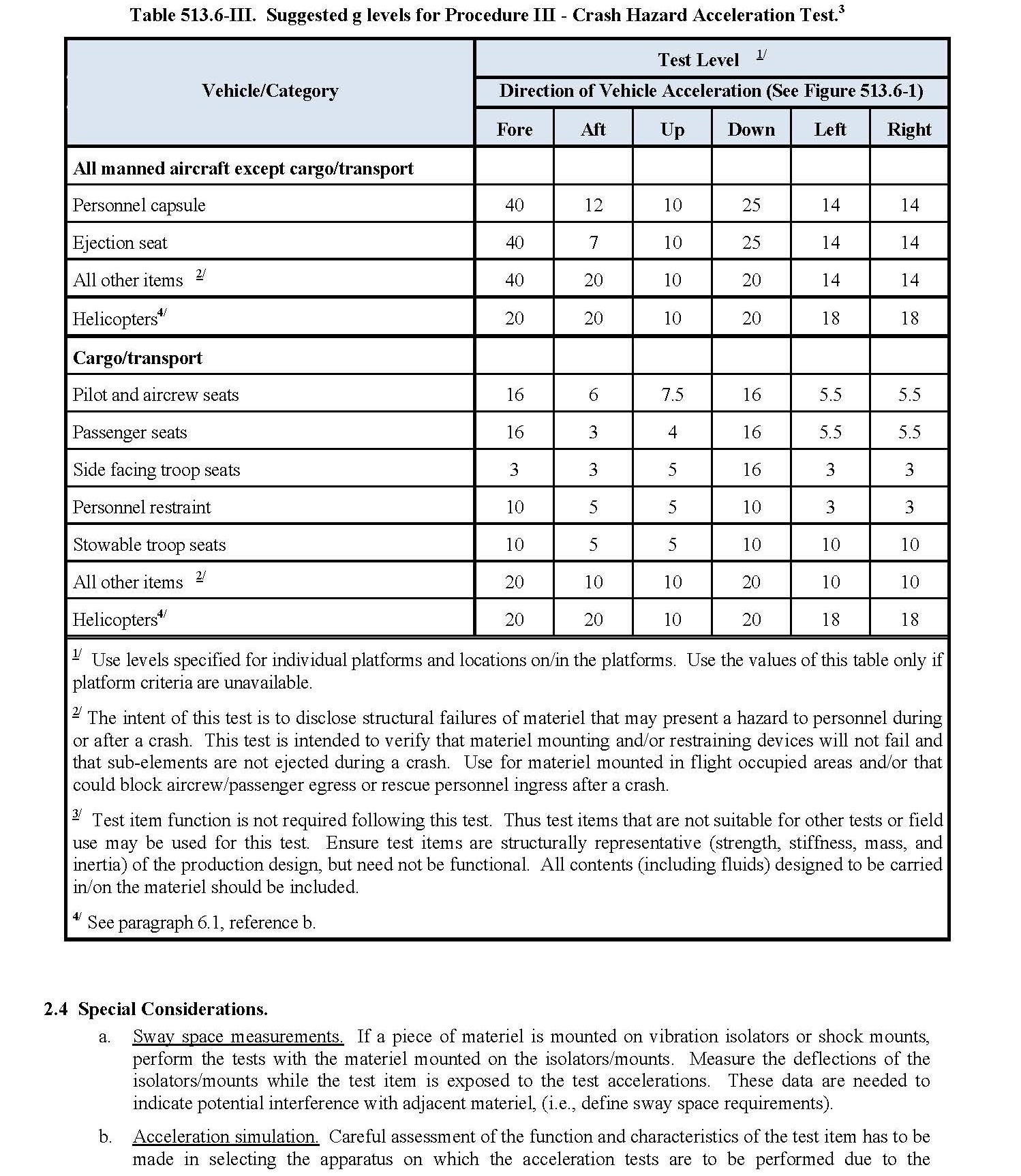 Acceleration results in loads on mounting hardware and internal loads within materiel. Note that all elements of the materiel are loaded, including fluids. The following is a partial list of detrimental effects from high levels of acceleration. If there is expectation that any of these may occur, it confirms the need to test for this effect.

a. Structural deflections that interfere with materiel operation.
b. Permanent deformation, structural cracks, and fractures that disable or destroy materiel.
c. Broken fasteners and supports that result in loose parts within materiel.
d. Broken mounting hardware that results in loose materiel within a platform.
e. Electronic circuit boards that short out and circuits that open up.
f. Inductances and capacitances that change value.
g. Relays that open or close.
h. Actuators and other mechanisms that bind.
i. Seals that leak.
j. Pressure and flow regulators that change value.
k. Pumps that cavitate.
l. Spools in servo valves that are displaced causing erratic and dangerous control system response.

PALS Electronics has experts on all subjects of test engineering, mechanical or electronic design, environmental condition engineer, system engineer, etc. PALS provides consulting, training, tailoring, test plan, test engineering, test services in all phases of your project. Please feel free if you have any questions or inquiries from https://pals.com.tr/contact